You are here: Home / Archives for Information About Bullying

Bullying is a huge social issue that affects school children of all ages. Bullying is the use of superior strength or influence to intimidate others, and typically involves a real or perceived power imbalance. While this definition remains true, it is important to note that there are many different forms of bullying that are prevalent among school aged children, and all of them are equally harmful. There are five different types of bullying that will be discussed in this article – Physical bullying, Verbal bullying, indirect bullying/Social alienation, Intimidation, and cyberbullying. This article will take a closer look at each of the five types of bullying that affect children in today’s society.

Intimidation is a form of bullying that involves a verbal or physical threat. Intimidation is done to frighten someone enough that the person being bullied submits to the bully and does whatever it is that the bully wants them to do.

The last and newest form of bullying comes in the form of Cyberbullying. Cyberbullying is a very broad term and can encompass messages, pictures, or information that is spread using computers and/or cell phones. Social media sites provide an outlet for cyberbullying to occur and allow the spread of information among peer groups very quickly. This ease of communication can enable a bully to spread rumors or post embarrassing content about an individual that is quickly seen by others and can be quite hurtful. Cyberbullying is still a new form of bullying, but as technology spreads it is expected that the percentage of cyberbullying incidents will increase.

No matter what the type of bullying that is occurring, the victim always ends up being physically or emotionally hurt. There are many ways that we can help prevent bullying from occurring. Talking about what bullying is to children and teaching them how to stand up to bullying can be an important part in stopping bullying. It is important to encourage children to speak to a trusted adult if they’re being bullied and also to keep an open line of communication between parents and children.  Talking to your child about their day on a daily basis can help to identify when a child is being bullied and what subsequent actions should be taken to prevent any future abuse.

Bullying is one of the hardest things that children have to deal with when growing up, and is especially prevalent among children in sports. Bullying is defined as the use of superior strength or influence to intimidate others, and typically involves a real or perceived power imbalance. Bullying can have a long lasting effect on the development of a child, whether the child is bully or the victim. 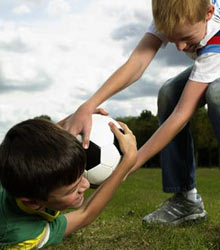 There are a variety of different types of bullying in sports, some of the more common examples include targeting team members that do not perform as well as others, intimidation of the best players in order to eliminate competition, coercing new team members to prove they belong on the team, targeting the “coaches favorite”, and harassment of players that make mistakes. The National Education Association reports that an estimated 160,000 children miss school every day due to bullying and that 1 in 7 children k-12 is either a bully or has been bullied. Another survey reveals that 48 percent of students that are involved in sports have been the target of hazing. Hazing is another form of bullying in which kids are humiliated and/or required to participate in dangerous activities in order to be accepted by other team members.

There are many different effects that bullying has on children that play sports including loss of focus,  they will play or perform tentatively, increased levels of anxiety and may drop out of competitions or sports altogether. The victims may also be too afraid to speak out against bullying due to embarrassment or shame.

The good news is that there are ways to combat bullying in sports. It is the responsibility of parents to listen to their child. Parents should explain that it’s ok for them to feel afraid of bullies. Concerned parents need to find out what is going on, and what actions the bully is taking to make their child feel inferior. Parents should also ask their child what they would like to do about the bullying. It is important that parents try to let children resolve the bullying issues by themselves at first. Parental involvement can spur future bullying or increase the severity of incidents.  Letting children deal with bullying on their own is a great way to help them boost their confidence.

So how can children stand up to bullies in sports? One method is by reinforcing the fact that children should not show fear to the bully. Bullies feed off of fear; It lets them know that what they are doing is having an impact. Body language plays a major role in this, parents should instruct their children to refrain from slumping their shoulder or pouting, and should try to keep eye contact with the bully.

Another method for coping with a bully is by throwing the bully off guard. When the bully is expecting the victim to stand down or walk away, the victim should say something friendly in an attempt to show the bully that their actions did not faze them. Approaching a bully with a friendly “Hi, How are you?” before they begin to bully a child is another method to throw a bully off. In general, bullies do not harass children that take initiative; they will target those that manifest fear.

Parents and Children are not the only ones that can take initiative to prevent or stop bullying. Sports coaches can also play a major role in deterring bullys in sports. Coaches should clearly outline expectations of their team in regard to bullying. They need to explain that bullying is not tolerated by members of the team, and that anyone caught bullying or talking negatively about another team member, a member of an opposing team, or any officials will sit out.