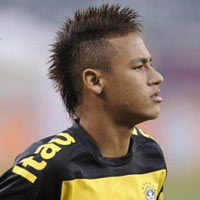 Neymar da Silva Santos was born February 5th, 1992 in Mogi das Cruzes, Sao Paulo, Brazil to Neymar da Silva, Sr. and Nadine Santos. Inheriting his name from his father, who was a former soccer player himself, Neymar’s father has been his adviser throughout his development as a soccer player.  He is currently a forward for the Brazilian National Team and Santos FC in the Brasileriao Serie A.

As a child, Neymar began playing soccer at a very young age and was offered a contract to the youth academy of Santos FC in 2003. The Santos FC youth academy has fostered players like Diego Walsh, Elano and Bruno Coutinho Martins.  When he was fourteen, Neymar went to spain to try out for Real Madrid, and passed the trial for his possible move to Spain. Santos FC ultimately paid 1 million Brazilian reals to Real Madrid in order to keep Neymar on the team. At age 17 he was finally awarded a spot on the Santos FC first team making his debut on March 7th, 2009, playing the last 30 minutes of the game. One week later, Neymar scored his first goal for Santos FC against Palmeiras  in the Campeonato Paulista semi-final game. Neymar and the Santos FC club ended up winning the Campeonato Paulista in 2010 and Neymar was named the best player in the competition. In his first season, Neymar ended up scoring 14 goals over the course of 18 games.

Often compared to Pele, who also came from the Santos Youth Academy, Neymar, is one of the greatest young talents in the sport of soccer that the world has ever seen. Neymar thinks of Pele as a role model and doesn’t like to make comparisons with Pele. Pele belives that Neymar is in fact a better player than Lionel Messi, but lacks the experience that Messi has. Neymar aspires to be like his Idols, Cristiano Ronaldo of Real Madrid, Wayne Rooney of Manchester United, and Andres Iniesta and Xavi, saying “I like to watch good football so I like to watch good players. I like Cristiano Ronaldo, Iniesta, Xavi and Wayne Rooney.”   Neymar  was ranked as the most marketable athlete in the world by SportsPro Magazine.

Neymar describes his style of play like that of Garrincha, a right winger and forward known to be the best dribbler in soccer history , and who won the World Cups of 1958 and 1962. Neymar is commonly known for his creativity, passing, finishing skills, exceptional dribbling and his explosive nature.  Although still a young soccer player, Neymar has already received some very big contract offers from European powerhouse soccer clubs such as West Ham United for £12 million and later from Chelsea to the tune of £20 million.

Santos FC renewed Neymar’s contract at the end of 2011, securing his position with the team until after the 2014 FIFA World Cup in Brazil. Due to his extreme talent, many speculate that he will never become a player the likes of Pele while playing for Brazil and as such may soon be looking for a move to a European team to fulfill his dream. Obstacles that Neymar needs to overcome to become one of the greatest soccer players ever are his temperament and his tendency to be selfish with the ball.

Check out the video below to see some of Neymar’s greatest moves!