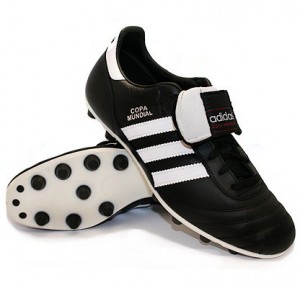 In the 70’s the materials that were used to produce soccer cleats also started to evolve. No longer was regular leather the only choice for making soccer shoes. Synthetic materials allowed for cleats to be lighter and stronger and improved traction. These new materials also meant that soccer cleats could now be produced in a variety of colors, even white! Adidas came out with their world famous Copa Mundial in 1979. These cleats were made from kangaroo leather which provided speed and versatility that was unmatched. The Copa Mundial soccer cleat is still available for purchase at the time of this writing. One of the more notable contemporary soccer cleat manufacturers, Diadora, was founded in Italy in 1977.

More and more manufacturers began to emerge during the 1980’s. Some of these manufacturers included Lotto & Kelme during 1982, and Umbro during 1985. Like the 70’s, newfangled technologies that emerged in the 1980’s allowed for even more performance increases. Placement of the studs on the cleats improved traction between the soccer shoe and the ground and improved materials allowed for players to have even more power and control of the soccer ball. Manufacturers began to place power & swerve zones on soccer shoes. Think of these as the “Sweet Spots” on the soccer shoes that when struck properly would inflict greater power and or swerve (curve) on a shot. 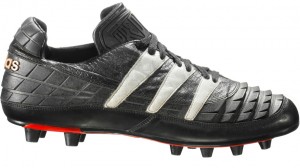 In 1994 Adidas released the Predator soccer shoe, which was designed by Craig Johnston during the 80’s. The unique style and unprecedented technology of the Predator made it an instant hit for Adidas. The predator soccer cleat would continue to evolve throughout the 90’s ultimately allowing for a more flexible sole and a “bladed” design for the studs on the bottom of the cleat. During the 1990’s soccer was extremely popular and more and more manufacturers joined the industry, most notably Nike. One of Nike’s very first designs was the Mercurial in 1998, making it one of the lightest soccer cleats on the market weighing in at only 200g.

As technology continues to advance, the design and performance of soccer cleats will continue to improve. Although there are lots of smaller companies that make cleats, the most popular companies are still Adidas and Puma, followed by Nike. Manufacturers no longer must choose between protection, performance or style – They are able to provide all three in the same design. As long as there is soccer, there will be a need for a soccer shoe. Just like any other industry, manufacturers of soccer shoes will always be looking for new ways to make a faster, lighter and stronger soccer cleat, and we can’t wait to see what they come up with!