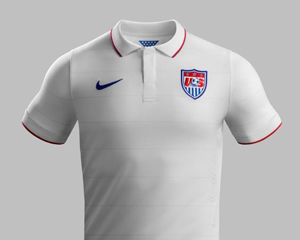 The United States Soccer Team Home jerseys for the 2014 FIFA World Cup in Brazil were released earlier this month. The World Cup jerseys were designed by Nike, and are a bit of a departure from the jerseys worn in the last World Cup by the United States. The new home jerseys for this year are almost solid white aside from the US Soccer and Nike logos on the front. The new home jersey is a collared shirt that has red trim along the collar and sleeves. The shorts and socks are also completely white. The exact same uniform design will be used for both the Men’s and Women’s United States World Cup jerseys. They were showcased on March 5th, 2014 in a exhibition game Vs Ukraine in Larnaca, Cyprus.

The creative director for Nike, Martin Lotti, said the following about the new United States World Cup Jerseys “The new kit clearly showcases the USA’s national pride and distinct sense of style, while also capturing the nations eternal optimism”. To further spotlight the United States’ national pride the phrase “One Nation. One Team.” is overlayed into the back lettering of the jersey in the players last name. However, this phrase is only visible when exposed to UV light, so this is not going to be a very eye catching feature of the new uniform for the 2014 World Cup.

Clint Dempsey, the team captain of the United States National Team, is excited to be wearing the new jersey. When asked about the new home jersey he had the following to say “It’s always an honor to wear the colors of your country, and this summer we will be hard to miss in an all-white look.” 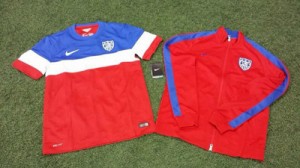 Along with the Home jerseys for the 2014 World Cup, the Away jerseys have also been released. The away kit is much more more visually appealing with a solid blue collar area, a white strip around the chest (on the front only) and the bottom of the jersey is all red. The back of the jersey will be all solid red. On the front the white stripe will have the players number placed in the center. Unlike the Home kit, the away jersey will be collarless.

All in all, the 2014 United States World Cup jerseys are rather plain, but still manage to be quite attractive. We can’t wait to see them on the pitch in the upcoming World Cup in Brazil!