You are here: Home / Archives for Fuleco the Armadillo

The 2014 FIFA World Cup is scheduled to take place June 12th, 2014 thru July 13th, 2014 in Brazil. The official slogan for the 2014 FIFA World Cup is ALL IN ONE RHYTHM™. It is more than just a slogan however, it is the underlying mindset and theme that is evident throughout all levels of the event organization. Influence of the ALL IN ONE RHYTHM slogan will be seen in events such as the FIFA Fan Fest, opening and closing ceremonies, and even through various Government campaigns promoting the 2014 World Cup. 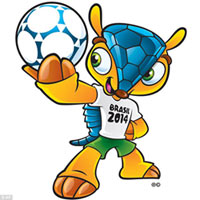 The official mascot for the 2014 FIFA World Cup is Fuleco the Armadillo – As pictured to the left. The voting process for the official 2014 World Cup Mascot was a three month long campaign that was supported by Coca-Cola. Fuleco won the voting with 48% of the vote followed by Zuzeco with 31% of the vote and Amijubi with 21% of the vote, making Fuleco the unanimous winner. One of the most important themes of the 2014 FIFA World Cup is the importance of the environment and ecology. As an Armadillo, which is a vulnerable species, the name Fuleco is a combination of the words “futebol” and “ecologia”. This combination is intended to communicate the importance of behaving in an environmentally friendly manner. (For more information about Fuleco, visit http://mascot.fifa.com/about.php)